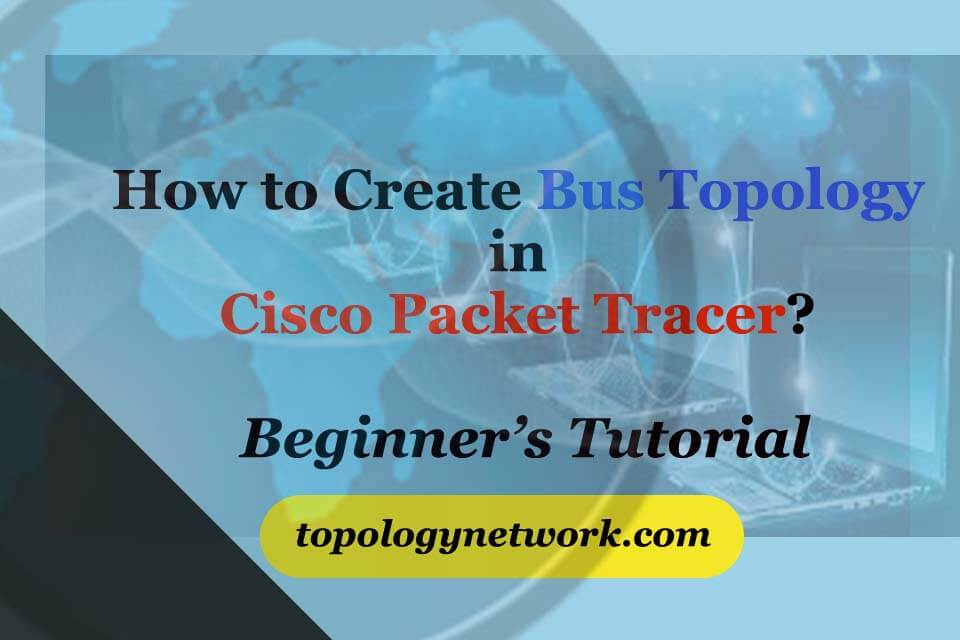 Know What You Need Before You Start

It’s always handy to check on different things before beginning your journey on designing bus topology network using Cisco Packet Tracer. We’ve made a simple and straight forward tutorial that explains each and every step in a clear and concise manner. As this is a beginner’s tutorial so you need to check few things before you move on with this tutorial. You’ll need to download and install Cisco Packet Tracer. After you’ve done that, get used to its user interface and practice a little to get used to its interface. However, if you are already familiar with these things then you’re welcome to skip and jump to the next section.

Learn: How to Use Cisco Packet Tracer?

Once, you’ve got the basics in your back you’re absolutely good to go further. So, let’s move ahead and learn how to create bus topology using Cisco Packet Tracer.

I guess, now its the right time to begin our step-by-step tutorial on creating bus topology network using Cisco packet tracer software. For the sake of simplicity and conciseness, I am just configuring an example bus network having only three computers. However, if you are able to understand this tutorial then I am sure that you’ll be able to design complex networks in addition to the easy ones. Unlike star topology or mesh topology, you’ll need to do some additional configurations in this tutorial.

We all know that a terminator (terminating device) is essential part of a computer network configured using bus topology. The bad news is that there is no terminator device in Cisco packet tracer toolbox. However, the good news is that there are alternatives that you can use. I will be using a switch and I will configure it in a way that acts like a terminator. You can also use this switch to extend your computer network as well which is great in my views. Isn’t it?

Go to the Toolbox>>Switches and choose 2950-24 switch. Click on it and place it on the drawing area. For your ease, I have provided the sub-steps in red-colored labels. I am sure that it will help you a lot. So, go ahead and draw your switch on the drawing area. 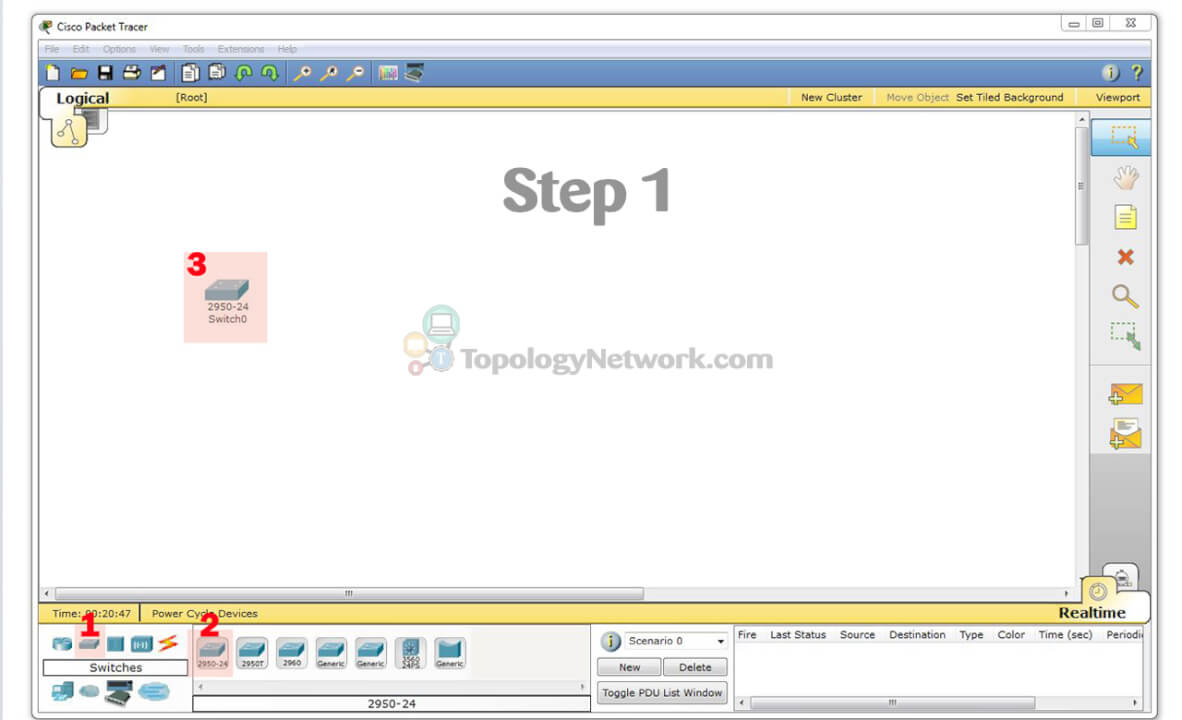 Configure Switch to Behave as a Terminal (Step # 2)

In the second, you’ll need to do some configurations so that the switch can behave like terminator. Don’t worry, configuration word might looks difficult but I am here to guide you through this phase. All you require is patience and practice.

A. Open configuration pane of Switch

Go ahead and click (left) on the switch you’ve just drawn. This will open up the configuration pane for you where you need to do a number of settings. 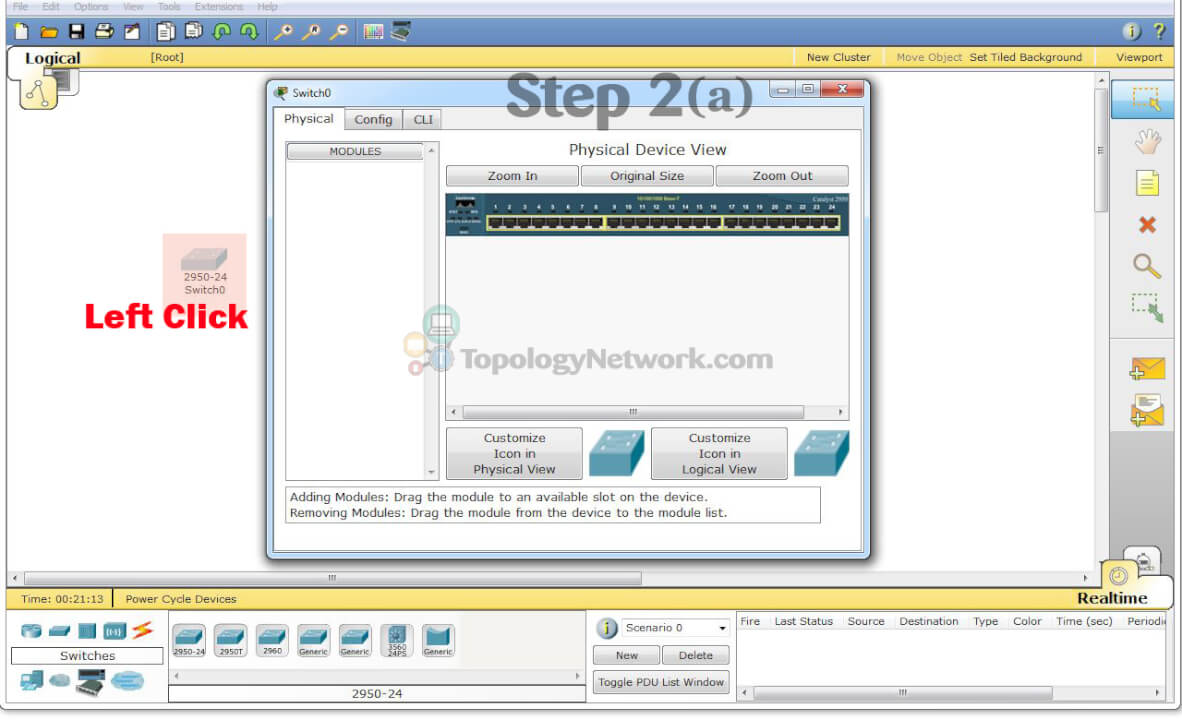 B. Go to the Config Tab 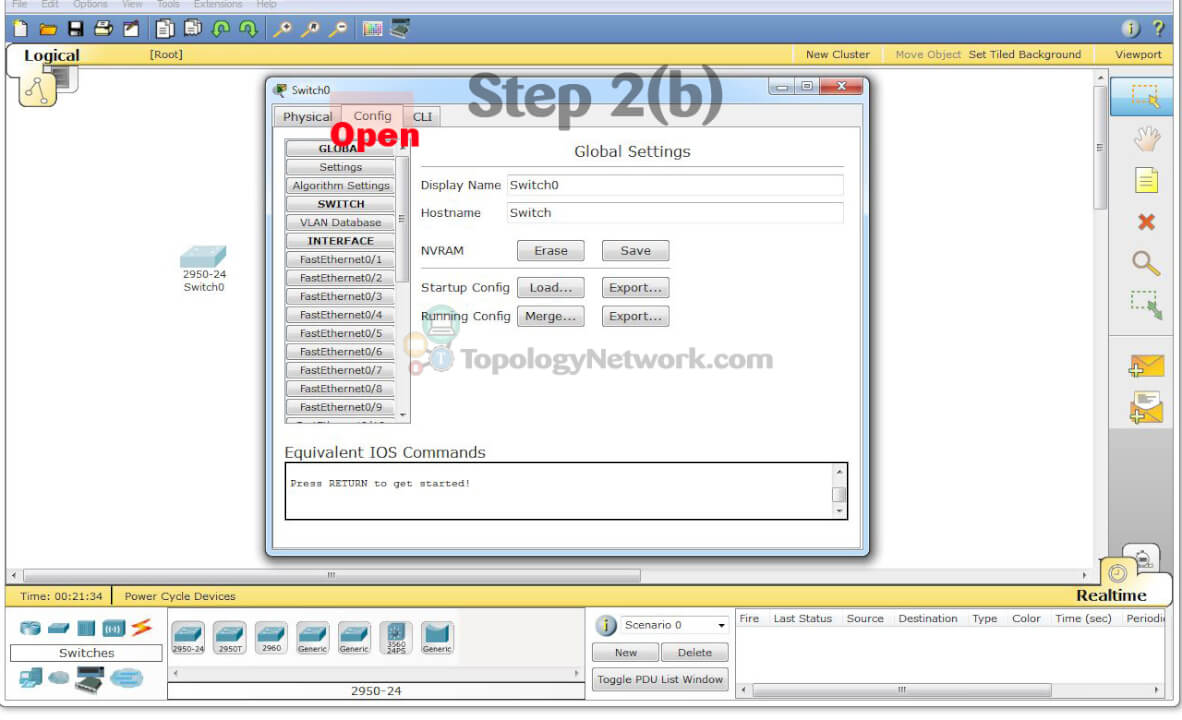 In the config tab, there are a bunch of things but you only need to change the display name of your switch. Changing the name only isn’t going to convert switch into a terminator but it seems good as it can help you distinguish different devices in your model. Go to the display name field and write ‘Terminator 1’ in place of ‘Switch 0’. 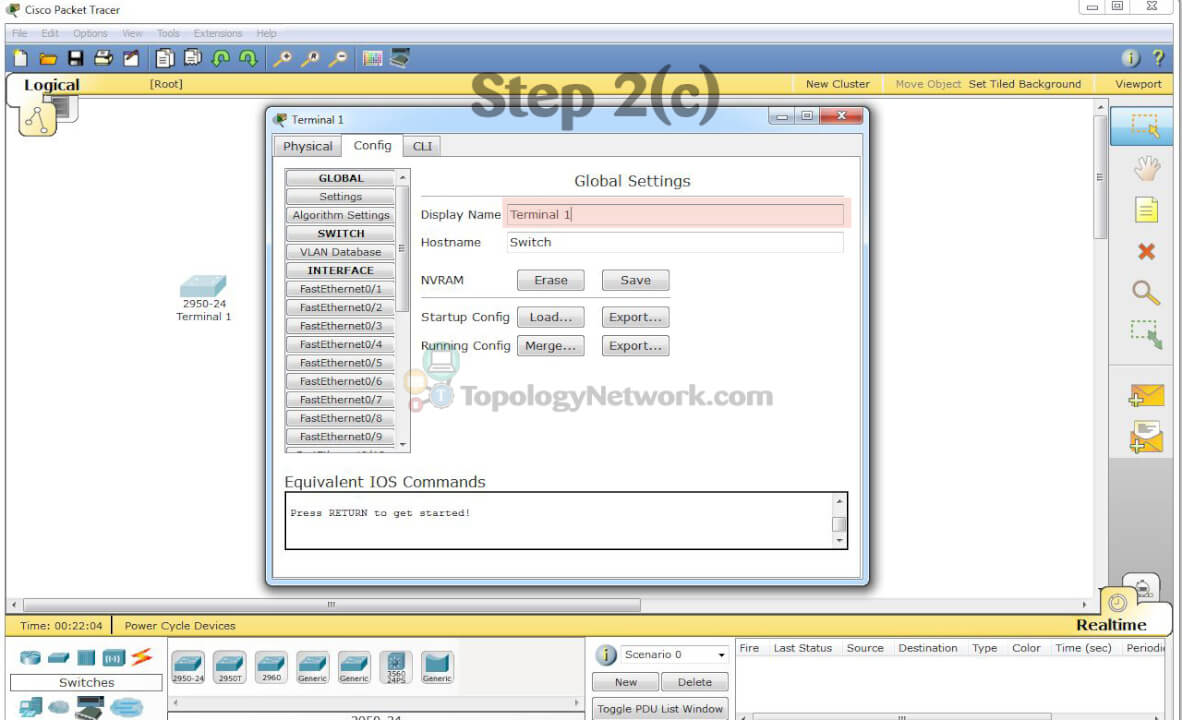 Inside the config tab you’ll find a number of settings on the left side. A switch has multiple ports to connect different devices but here, we’re going to connect only a single wire to the switch i.e. the main backbone cable. These ports are shown right under the ‘Interface’ tab and labelled as ‘FastEthernet0/x’ with each one represents a single port. Leave the ‘FastEthernet0/1’ as it is and turn off the port status for ‘FastEthernet0/2’. Repeat the same step for all remaining ports as well and by doing this your switch will show identical behavior as that of terminator. 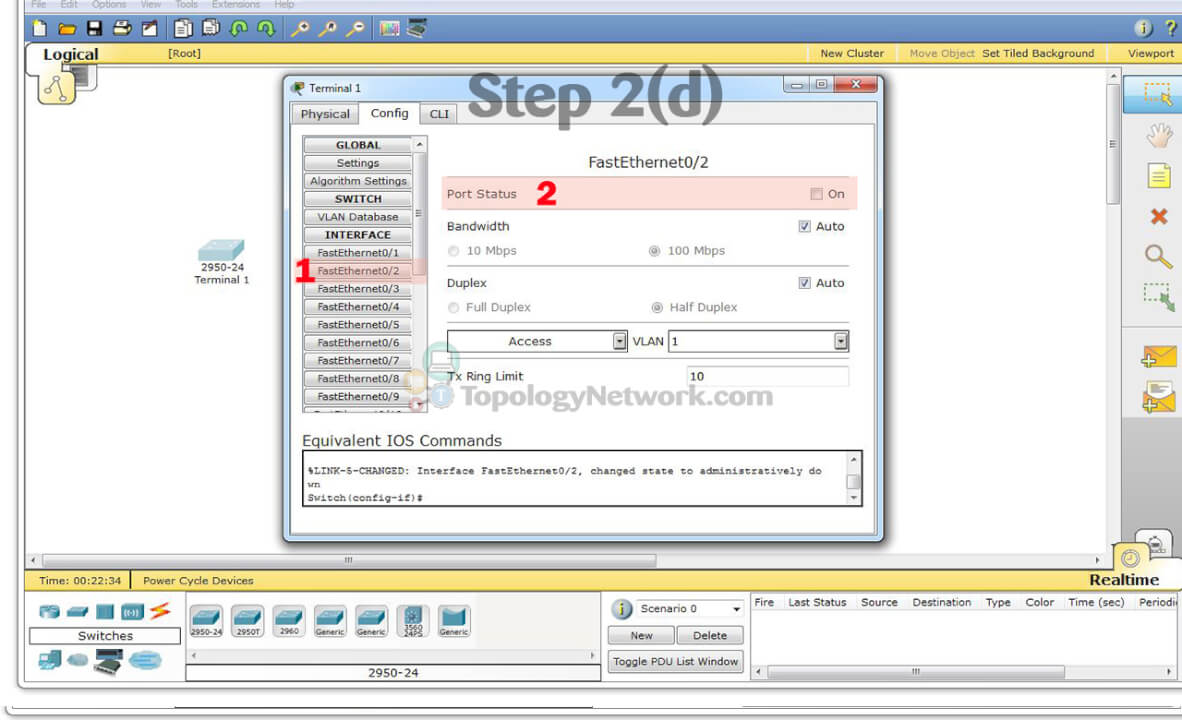 Everyone knows there are two terminators connected to backbone cable in bus topology. In this step, I am going to draw this second terminator on the drawing area. You can follow step 1 and step 2 to draw this second but this will consume time as you’ll have to go through configuration settings. I am going to tell you shortcut method that saves your time and keeps our how to create bus topology in Cisco packet tracer tutorial simple.

A. Copy the first terminator

As I’ve promised earlier about the shortcut method and you’re probably familiar with this. This is the standard copy/paste method that we use in our daily routine quite often. I am going to copy the terminator that I’ve just created in the first two steps. You can do it simply by clicking on the terminator and click the copy icon from the toolbar. This is indicated in the below picture. 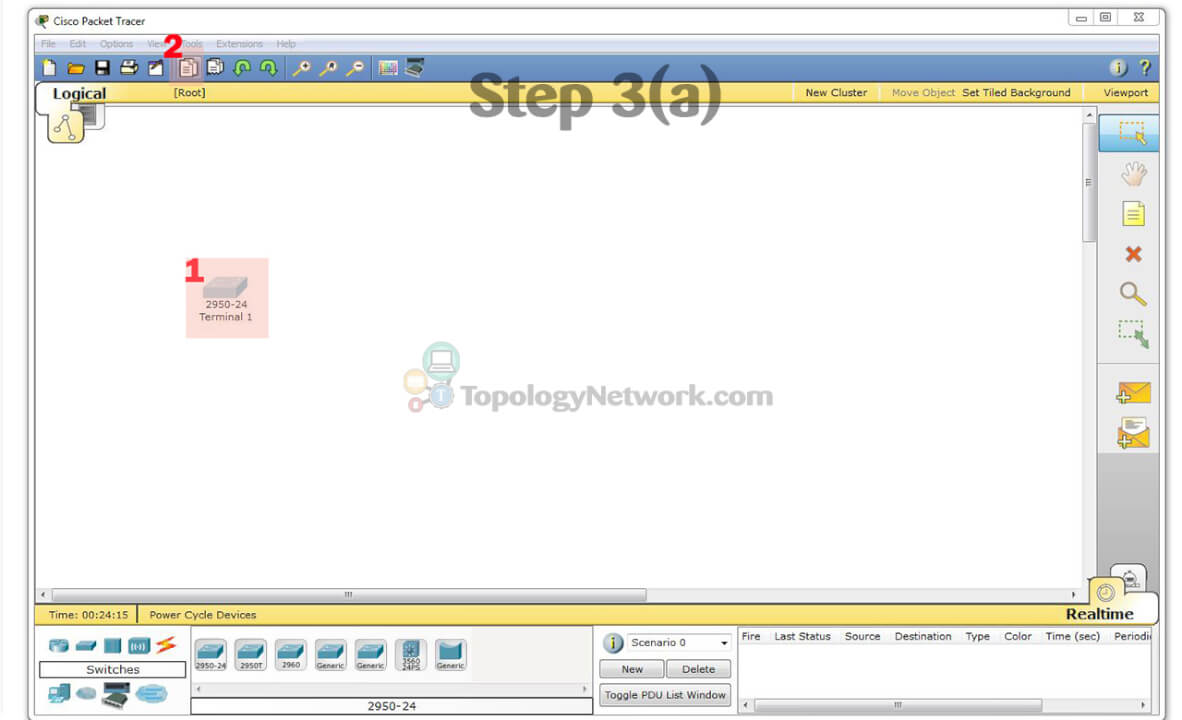 B. Paste the copied terminal on drawing area

After you’ve copied the terminator, now you need to paste it on the drawing area. For doing this click the paste icon right besides the copy icon from toolbar. Now you can clearly see the second terminator on your screen. 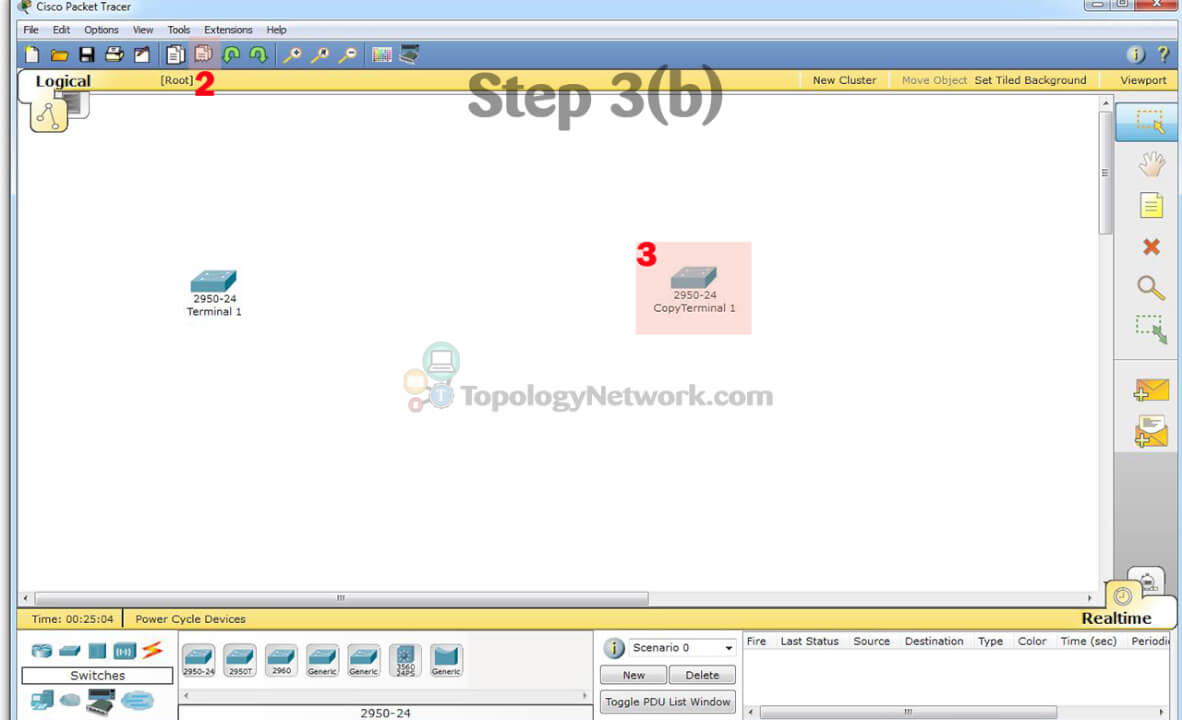 Although this step is not necessary but for the sake of convenience it’s always handy to properly name every device/component that you’ve used in your bus topology design using Cisco packet tracer. Repeat the step 2 (a), (b) and (c) to get it done easily. Or you can simply follow the sequence: 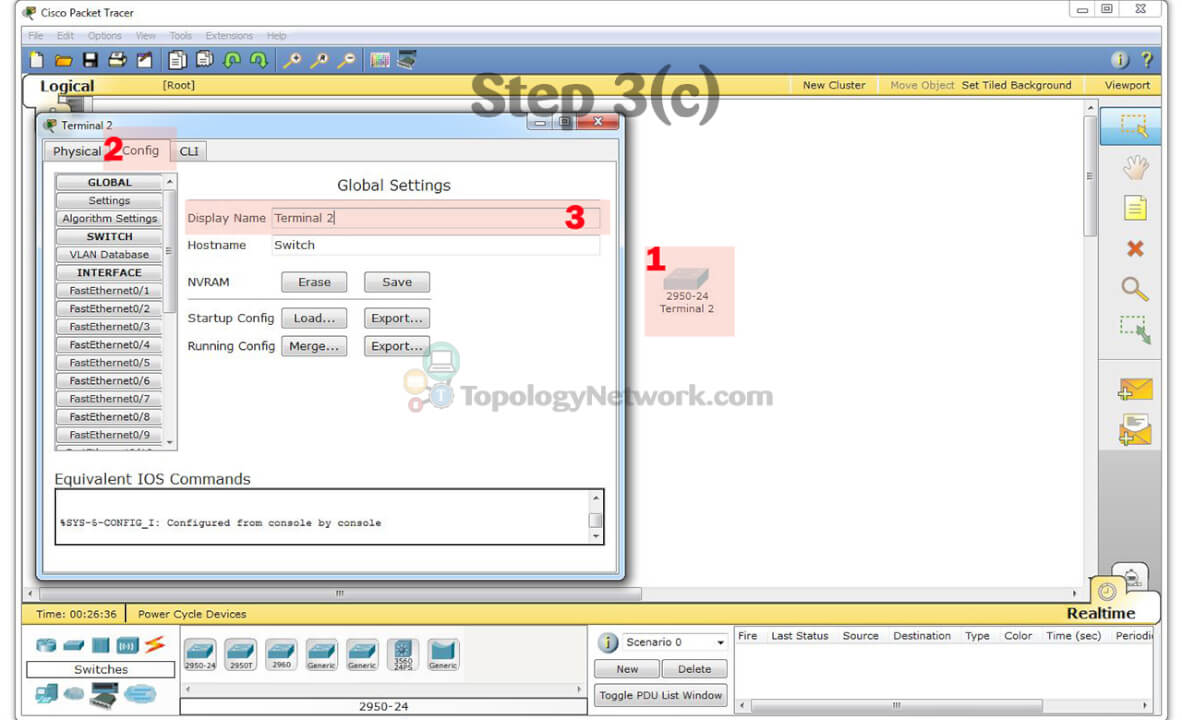 This step is extremely critical in this beginner’s tutorial on how to create bus topology in Cisco packet tracer so you need to be careful in doing this. Although we’ve created the terminators but we can’t simply connect these two terminators directly with a wire. You might be thinking that why are we doing this. The answer is that: in bus topology network, drop lines are used for connecting computers. You might think drop line as a standard T-connector but unfortunately there is no such connector available in Cisco packet tracer toolbox.

To fill the place of a T-connector, I am, once again using the 2950-40 switch and I will configure it to behave as a drop line. I’ve mentioned earlier that I am designing a bus topology network having only three computers. So, I am going to do the following things:

The final look of bus topology network in Cisco packet tracer will look like: 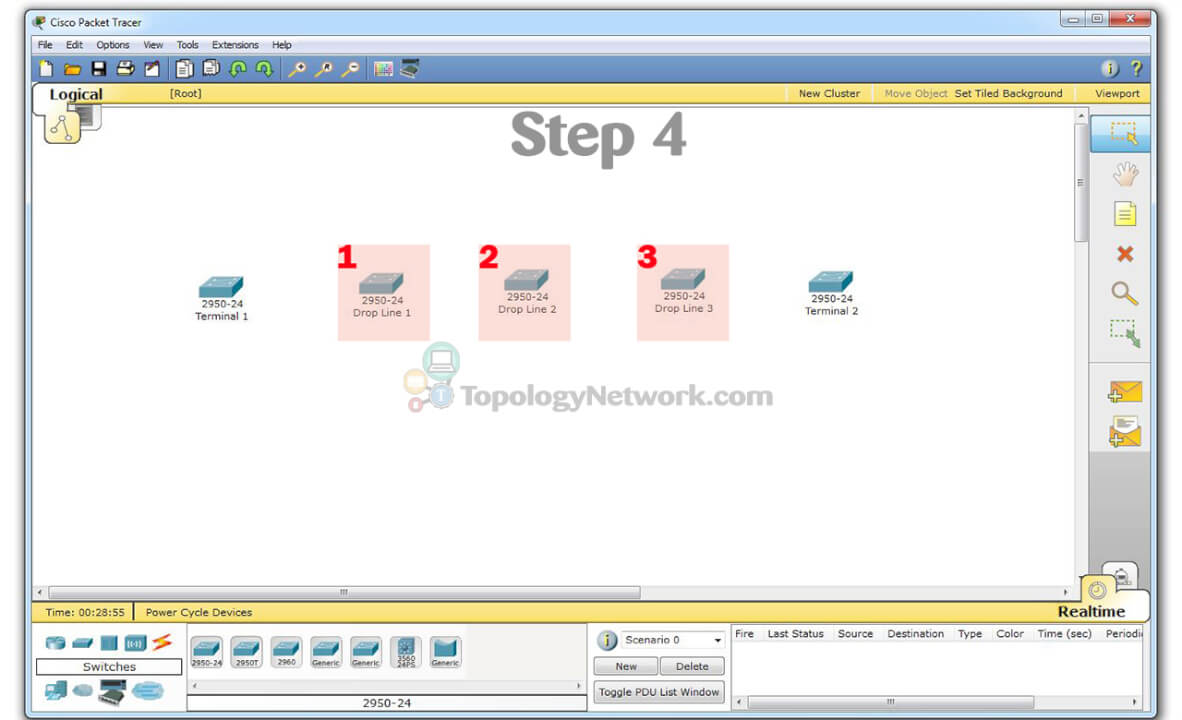 Now we’ve laid the foundation of our network, the next big step is to connect these together. This connection forms the basis of backbone cable of your network. I will be connecting each switch to the other one by using copper cross-over cable. You can easily find it in the toolbox connection area. Your network layout will look like this: 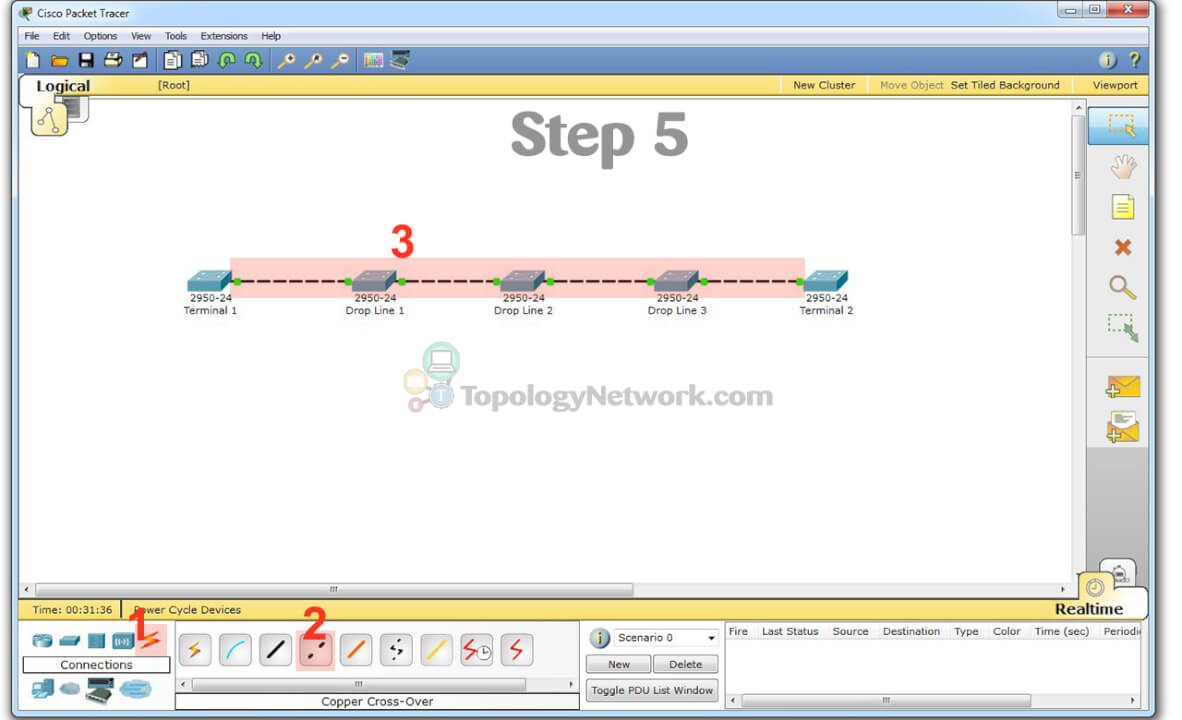 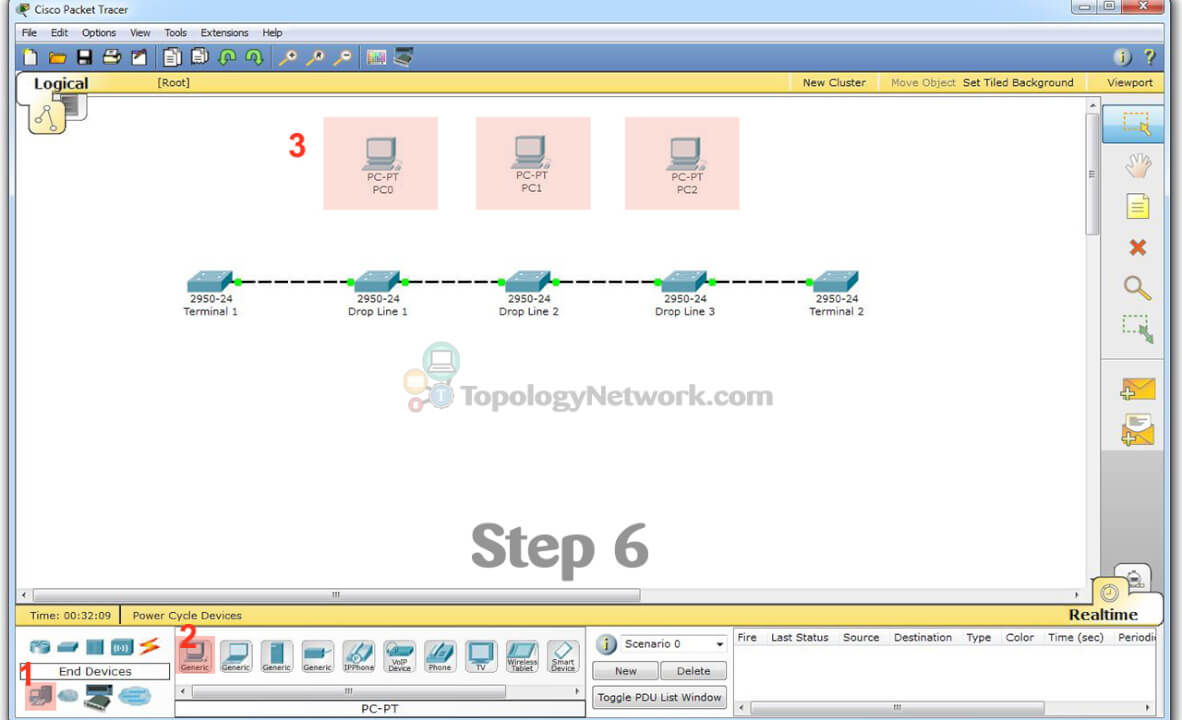 Go to the connections toolbox and choose the copper straight through cable for connecting each computer to corresponding drop line. Once you’ve done this, your network will give classical looks of bus topology network that you’ve designed yourself in Cisco packet tracer. 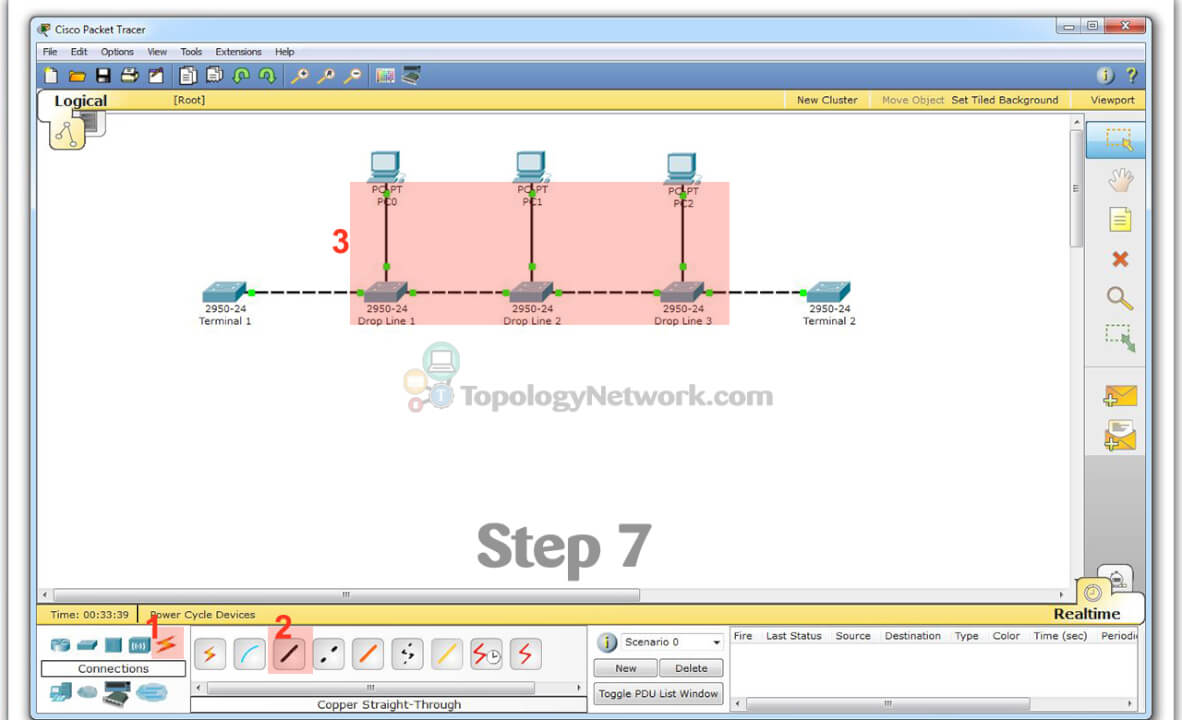 IP address are the fundamental of any private or international computer network like. Whether you’re using network at your home or browsing the internet, IP addresses are always there. In this last step, I will be assigning IP addresses to each computer present in our step by step guide on how to create bus topology in Cisco packet tracer. You will have to repeat the following steps for each device present in your topology design. I have three devices so I’ll be repeating this three times. 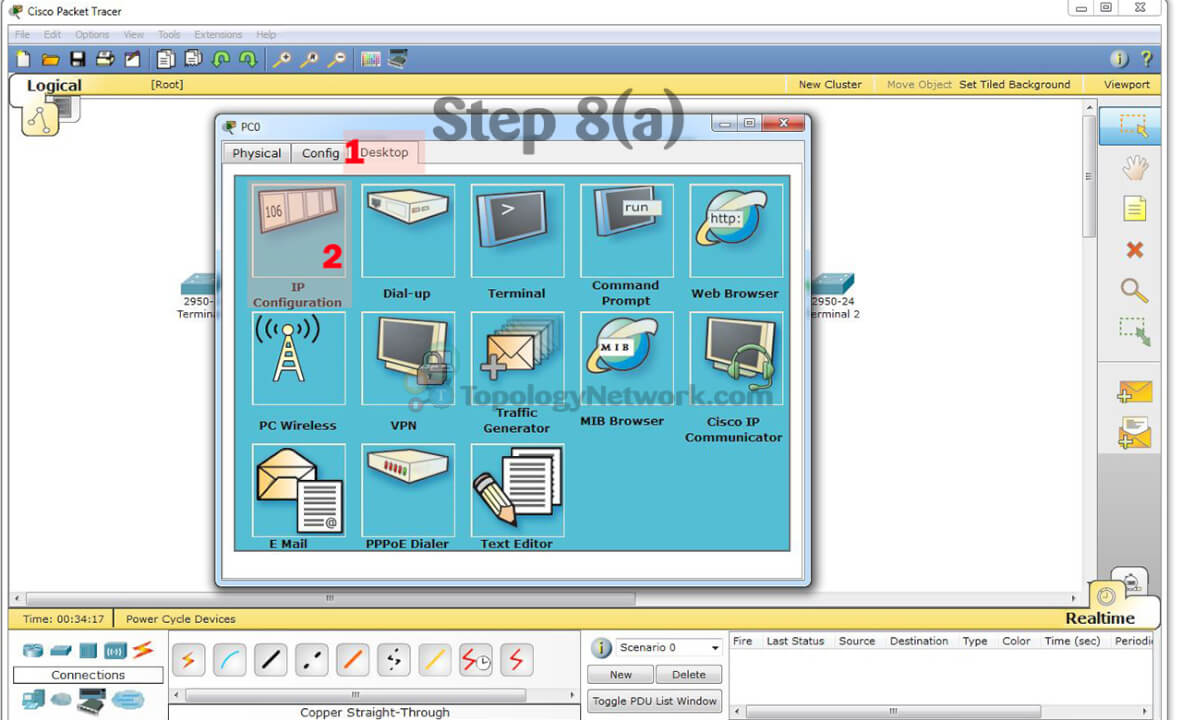 In IP configuration settings, you’ve to do the following three settings:

Generally, for beginners using static IP address type is highly recommended. Once you’ve got enough hands on training then you can work with DHCP easily. Go with following configuration for the first end device/computer: 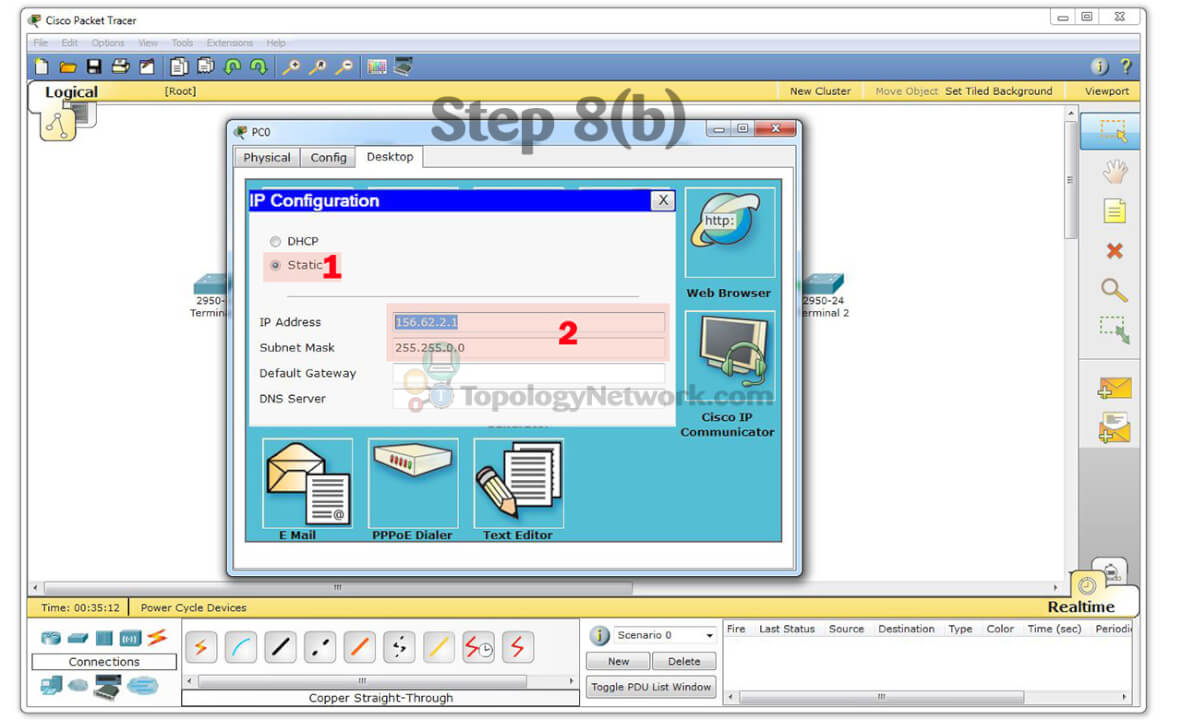 Creating bus topology in Cisco packet tracer is not difficult at all. If you are able to follow the fundamentals accurately then you’re good at designing medium to complex level computer network topology design without facing any issues. General recipe of this beginner’s tutorial on how to create bus topology in Cisco packet tracer requires you to have basic knowledge of bus topology in your mind. You’ll simply need to configure terminator and drop lines configuration, add end devices and configure their IP addresses. I’ve tried my utmost to keep it as simple as straight line but if you’re still facing difficulties then you’re most welcome to write to me. Stay tuned for more…… There is a lot to come…. Cheers 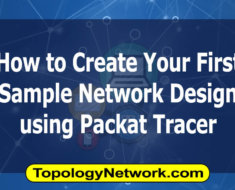 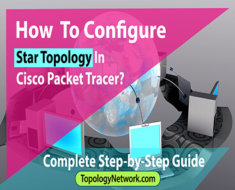 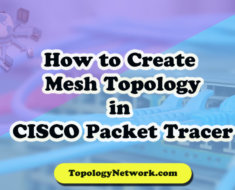 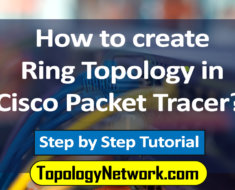 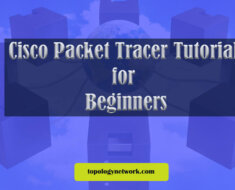